India assumes China is increasing its presence in the Indian Ocean with its 'String of Pearls' strategy to which it has recently been added the island nation of Seychelles and now Gwadar and CPEC in Pakistan. The term 'Sting of Pearls' was coined by the United States, but Indian defense analysts frequently use it.

Indian viewed Gwadar as a large-scale naval mobilization program by China and in a worst-case situation, Beijing could use these Navel bases to threaten India's security, risk global sea lanes and challenge the United States for regional naval superiority. 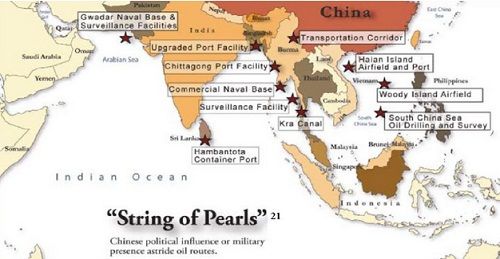 India is also worried about China's growing investment in Pakistan, predominantly to fund a new batch of nuclear reactors to help Pakistan's plans to add four new nuclear plants by 2020, with four more reactors in the pipeline (adding up to a total power capacity of 7,930 MW by 2030).

Since long India is also worried as it has its eyes on energy assets in Central Asia and Afghanistan to fulfill its energy thrust, but China has eaten up many of these in recent years.