Our group members include scientists, postdocs, and PhD students

Materials for photovoltaics and catalysis and their applications in sustainable development

PhD and Postdoc positions are available time to time

I am fond of sports, travel and photography

A few selected images and videos

Novel HTM material for Perovskite solar cell
The present invention relates to organic compounds, their use as hole transport materials. And their use to tune HOMO levels, for Photovoltaic, Optoelectronic and electrochemical devices, such as lasing, light emitting devices, photodetection in particular solar cells and solid state cells including tandem cell applications comprising these compounds.

Perovskite solar cell technology is a revolutionary third generation photovoltaic system that is taking the renewable energy world on a dizzying ride of new prospects. One of the problems with the typical perovskite solar cell configurations used is their reliance on an expensive and difficult to manufacture organic hole transport material called "Spiro-MeOTAD" (for short). Additionally, this material is currently under patent protection from Merck, and as such has restricted supply options to facilitate rapid expansion in the marketplace.

Spiro-based organic semiconductors have attracted considerable attention, more precisely, 2,2',7,7'-tetrakis-(N,N'-di-4-methoxyphenylamine)-9,9'-spirobifluorene (spiro-OMeTAD) is selected as the benchmark HTM for PSC. However, the tedious multi-step synthesis of Spiro-OMeTAD makes it prohibitively expensive and cost-ineffective. Moreover, high-purity sublimation-grade spiro-OMeTAD is required to obtain high-performance devices. Therefore, a huge interest in the development of novel small-molecule organic semiconductors has been raised to find a better understanding between HTM structure and PSC performance. So far, although a large number and different types of HTMs were reported reaching an efficiency of 16-17%, only very few candidates showed PCE values over 19%, mainly because of the additional interaction improving the hole transfer at the HTM/perovskite interface. 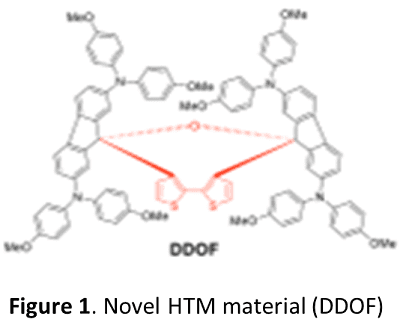 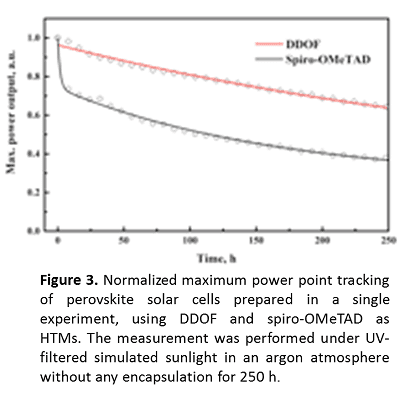 To summarize, we offer a novel dispiro-oxepine derivative as a hole transporting material, obtained by facile 3-step synthetic route. Perovskite solar cells employed DDOF as HTM showed one of the highest power conversion efficiency of 19.4% reported to date. The solid structure study by single crystallography indicated again that the - interaction is not prerequisite for designing effective HTM. Moreover, improved long-term stability over 850 h has been demonstrated, making this HTM as a very promising candidate for industrial production.

Applications
The present invention is for Photovoltaic, Optoelectronic and electrochemical devices, such as lasing, light emitting devices, photodetection in particular solar cells and solid state cells including tandem cell applications comprising these compounds.

Project Status and next Step
Patents covering the proprietary support materials have been filed in the USA. The new materials have been well characterized and are ready for scale-up production. The current capability is in batch production of several grams, and it is expected to increase the production by 5 to 10 times in the next stage.

QEERI-HBKU and EPFL would like to meet with companies interested in taking this promising technology to the market. We expect the technology to be of interest to the following organizations: