Everyday Science
Everyday Science: Key Facts
Mercury:
Mercury is the closeset planet to the sun, but it doesn’t have an atmosphere to trap the heat from the Sun. As a result, the temperature rises to 427°C at noon, and drops down to -173°C at night.

Venus:
Venus has the thickest atmosphere (97% Carbondioxide) in the solar system, causes a severe greenhouse effect, that is it traps heat from the Sun. The temperature on Venus is 461°C, and it remains same in day and night, because of large amount of heat trapped by the atmosphere.
So, the atmosphere of venus makes it the hottest planet in the solar system.
Life on Earth:
Conditions on Earth are perfect for life. We need a reasonable size of Carbondioxide for reasonable Green house effect, so that we could get reasonable heat from the Sun.
On the other hand, if we increase the size of Carbondioxide in atmosphere, it will result in more Green house effect, and the temperature on Earth will increase. And, the Earth will not remain supportive for life as other planets.
The Solar System
The Sun, Planets, Asteroids and other objects in orbits, are together known as the Solar System.

The Sun
The Sun is extremely hot and brightly glowing star of gas. It’s temperature is ranging from 6000°C on the surface to 15,000,000°C in the centre. Its energy comes from nuclear reactions deep in its core.

Mercury
Mercury is the closeset planet to the sun. It has cratered surface but it doesn’t have an atmosphere to trap the heat from the Sun. As a result, the temperature rises to 427°C at noon, and drops down to -173°C at night.

Venus
Venus is the brightest Planet. Venus has the thickest atmosphere (97% Carbondioxide) in the solar system, causes a severe greenhouse effect. The temperature on Venus is 461°C, and it remains same in day and night.

Earth
Eath is the only known Planet where conditions are perfect for life. Its distance from the Sun, and atmosphere makes it perfect for life. The Earth also has a bodyguard, Jupiter, that save it from any collision with the Asteroids.

Mars
Mars is the fourth planet from the Sun in the Solar System. Mars is also called “Red Planet” because of its reddish color because of iron oxide. It has a thin atmosphere, mainly Carbon Dioxide, a dusty surface and polar caps. The rotation of Mars is also tilted like Earth that produces seasons.

The Asteroids
Asteroids are smaller objects than Planets, in orbit around the Sun. Their sizes are ranging from diameter of few kilometers to 1000km. Most Asteroids have orbits between Mars and Jupiter, and thus separates inner Planets from outer ones. Some Asteroids have much more elliptical orbits that cross the path of other Planets. So, there is possibility of collision of Asteroids with other Planets.

Saturn
Saturn is another gassy giant, and second largest Planet in the Solar System. It is surrounded by rings. These are not a solid mass, but millions of pieces of ice and rock.

Uranus
Uranus is another gassy giant. Its axis of rotation is tilted at more than 90. It also has rings, but much fainter than Saturn’s.

Neptune
Neptune is the outermost Planet in the Solar System It is also a gassy giant. It also has a faint ring system.
Solar System: Key Facts

How important the Atmosphere is....??
Mercury is the closest planet to the Sun, then why Venus is more hotter than Mercury? 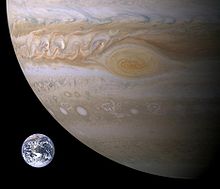 Size of Jupiter in comparison with Earth 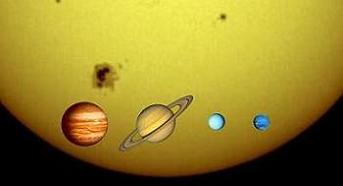 Size of Sun in comparison with Gassy Giants (Jupiter, Saturn, Uranus, Neptune)
Alloys
Mixture of two or more Metals is called Alloy. By mixing Metals, we usually improve the quality of Metals.
For example, Steel an alloy of Iron is stronger than Iron is made by adding 99% Iron with 1% Carbon.
Metals: Key Facts
Air
Air is a mixture of gases. Its composition is:

Nitrogen
Nitrogen gas is essential for the formation of all animal and plant proteins.

Oxygen
All animal and plants need Oxygen for respiration. Oxygen is essential for combustion.


Computer Network
A computer network is a group of connected communicating devices such as Computers and Printers.

internet (lower case letter)
An internet is two or more networks that can communicate with each other.