American Diversity:
America is a home to nations from all over the world; from Africa to Europe; from Asia to North America. According to Poet Walt Whitman, "Here is not merely a nation but a teeming Nation of nations." The first European, who landed in America, was Christopher Columbus in 1492 or 1493.
Immigrants (Emigration to United States of America)
Emigration to America has its roots in thousands years of long history. After Columbus, the major wave of immigration ocuured in the early 1600s with people from Europe. But Bristish culture, tradition and English language became dominant. Besides, immigrants from Africa continuosly brought in chain from sixteen to early
eighteen centuries. In general, Immigrants from all over the world came America for variety of reasons, and still America is a fascinated place for many others.
Statue of Liberty welcome immigrants, to the "Land of Oppotunities".
From Articles of Confederation to the Constitution of the United States

Declaration of Independence
Even before the war ended, Continental Congress on July 4, 1776, announced that the thirteen American colonies at war were now independent states, and thus no longer a part of the British Empire.
After the Declaration of Independence, the Continental Congress drafted The Articles of Confederation in 1776-77 and it became the working constitution of the Unites States. The Articles of Confederation was ratified by States in 1781. 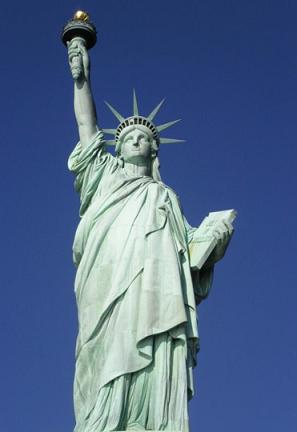 Give me your tired, your poor, your huddled masses yearning to breathe free. . .